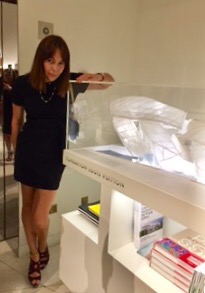 I AM here tonight with #makeapromise  UNICEF & LVMH Let’s Help Children around the World.

Louis Vuitton and the United Nations Children’s Fund (UNICEF) signed a partnership on January 11th to support the most vulnerable children around the world. Louis Vuitton has launched a major campaign to raise funds for UNICEF.

Louis Vuitton’s partnership with UNICEF will help support the organization’s efforts to protect children exposed to natural disasters and conflicts, providing health care, nutrition and education. “UNICEF is a strong and reliable leader in humanitarian action. Together, we can make a real difference to children in the most vulnerable situations,” said Michael Burke, Chairman and CEO of Louis Vuitton.

To raise funds, Louis Vuitton has designed a special product, the Silver Lockit, inspired by the unpickable tumbler lock invented by Georges Vuitton in 1890 to protect the contents of trunks. The Silver Locket is available in both pendant and bracelet models. For each sale, Louis Vuitton will donate $200 to UNICEF.

Adriana Sassoon
Louis Vuitton has also created a digital campaign to raise awareness and encourage as many people as possible to support UNICEF’s actions. This commitment is symbolized by a “pinky promise”, a popular way among children to signify that a promise has been sealed by entwining their little fingers. People are invited to share their pledge on social networks via the hashtag #MAKEAPROMISE.

My favorite piece was of course The Campana brothers Milan 2015: a swinging cocoon chair by the Campana brothers and seats made from leather petals by Raw Edges are among the contributions to a collection of portable furnishings for French fashion house Louis Vuitton.

The campaign went live on January 12 in Los Angeles at the sixth UNICEF Ball. Numerous Louis Vuitton friends were on hand to support the initiative. They joined Nicolas Ghesquière and Léa Seydoux, the Maison’s new muse, who interlocked their pinkies to make a promise.

Through this ambitious global partnership Louis Vuitton encourages everyone to get involved and support UNICEF by making a direct donation or by purchasing the Silver Lockit, and to show and share their commitment on social networks with #MAKEAPROMISE.