Anish Kapoor: Past, Present, Future assembles 14 works made since 1980, a period in which Kapoor’s sculptures and installations have grown increasingly ambitious and complex. The first U.S. museum survey of Kapoor’s art in more than 15 years, and the first ever to be seen on the East Coast, the exhibition premieres a new resin sculpture and features many pieces on view for the first time in this country.

In the hands of sculptor Anish Kapoor, forms become at once monumental and evanescent, present and absent, physical and ethereal. Whether using the materials of classical sculpture like stone and bronze or newly applied forms of aluminum, pigment, enamel, resin, polymer, and PVC, Kapoor’s sculpture seems to disappear, dissolve, levitate, or extend beyond a space the viewer can perceive.

The sculptor, born in Bombay and based in London, is perhaps best known in the U.S. for Cloud Gate, a permanent 110-ton sculpture of highly-polished stainless steel created for Chicago’s Millennium Park, and Sky Mirror, a breathtaking, 35-foot-diameter concave mirror that was shown in 2006 at Rockefeller Center in New York. Kapoor emerged as one of a highly inventive generation of British sculptors during the 1980s, and since then has created a body of work that has married a modernist sense of pure materiality with a fascination for the manipulation of form and the perception of space. 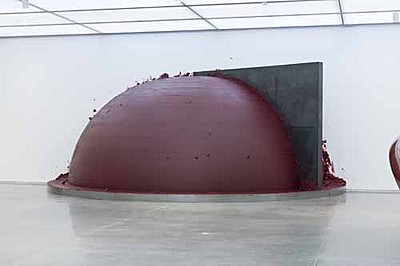