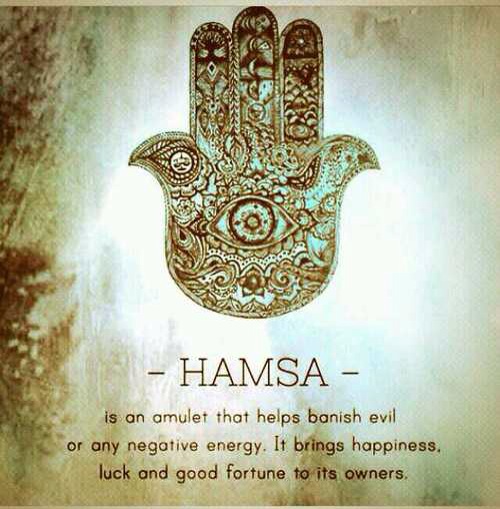 Hamsa
Although it may derive from Islamic or pagan culture, the hamsa today has become a Jewish and Israeli symbol.

A hamsa is an amulet shaped like a hand, with three extended fingers in the middle and a curved thumb or pinky finger on either side. It is thought to protect against the “evil eye” and is a popular motif in both Jewish and Middle Eastern jewelry.

Where Does the Hamsa Get its Name?
The name “hamsa” comes from the Hebrew word “hamesh,” which means five. “Hamsa” refers to the fact that there are five fingers on the talisman, though some also believe it represents the five books of the Torah. Sometimes it is called the Hand of Miriam, after Moses’ sister.

In Islam, the hamsa is called the Hand of Fatima, in honor of one of the daughters of the Prophet Mohammed. Some say that in Islamic tradition the five fingers represent the Five Pillars of Islam.

Many scholars believe that the hamsa predates both Judaism and Islam, though no one is certain of its origin.

Symbolism of the Hamsa
Hamsas always have three extended middle fingers, but there is some variation to how the thumb and pinky fingers appear. Sometimes they are curved outwards as in the example shown above, other times they are just significantly shorter than the middle fingers. Whatever their shape, the thumb and pinky finger are always symmetrical.

In addition to being shaped like an oddly formed hand, many hamsas will have an eye displayed in the palm of the hand. The eye is thought to be a powerful talisman against the “evil eye.” The evil eye is a certain “look” that can cause bad luck for the person at whom it is directed. This “look” often originates with a person, though not always intentionally. Legends about the evil eye give both regular people and those with certain powers the ability to cast the evil eye. In the case of the average Joe, envy is most often cited as the unintentional source of the evil eye.

Other symbols that can appear on the hamsa include fish and Hebrew words. Fish are thought to be immune to the evil eye and are also symbols of good luck. Going along with the luck theme, “mazel” – meaning “luck” in Hebrew – is a word that is sometimes inscribed on the amulet. (Fish and the word “mazel” appear on the example above.)

Popular ways to hear the hamsa include as part of a jewelry design or on a key chain. It can also be displayed in your home as a decorative element. However it is displayed, the amulet is thought to bring good luck and happiness ( for those that believe in it).

You’ll see a prayer in Hebrew on the back of Hamsas, it says this:
” Let no sadness come to this heart. Let no trouble come to these arms. let no conflict come to these eyes. Let my soul be filled with the blessing of joy and peace”.

Let no sadness come
to this heart
Let no trouble come
to these arms
Let no conflict come
to these eyes
Let my soul be filled with the blessing of joy of peace.