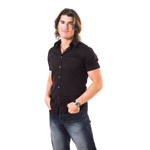 Elan Sassoon, what are you doing around here in icy New England? You’re an LA dude, reared on coolness, sunshine and beach parties. You’re the son of Vidal Sassoon. Yeah, Vidal. As in: “If you don’t look good, we don’t look good.” As in: You graduated from Beverly Hills High. As in: Your neighbor was Bob Dylan and his son, Jakob, your best bud. As in: What the hell are you doing here?
But here you are! You’re opening a swishy new salon, Mizu, in an even swishier new hotel, the Mandarin Oriental—tomorrow! You’ve bought space on Commonwealth Avenue to build the world’s first school of hair design and skincare, the Academy of Aesthetics by Elan Sassoon. You moved your wife and two children here to be freezing with the rest of us.

Welcome, guy! You’ll fit in. You have that Yankee work ethic, for sure. How could you not? Your dad was sent to an orphanage in England, just doors away from his mother, who sent him there because she could not afford to feed him. When he was 14, she took him to a neighborhood barbershop to get a job. “We don’t have any jobs,” the owner said. “Thank you, sir,” young Vidal replied. “I understand.” After which he took his mother’s hand, opened the door for her and escorted her. “Wait.” The owner said. “I like your manners. I think we can find work for you here.”
And so begat the gazillionaire empire of Vidal Sassoon, a collection of international salons, products and the infamous geometric “bob.” Vidal bore four children but only took one of them on industry trips to fashion weeks and shows—you. And despite the mansion and trappings of new money, your father insisted his kids work. Hard. You and your brother David worked construction, pouring cement in the summer. You were expected to earn their own money to buy things.

After graduating from American University, you chased Hollywood. You produced nine films, starring actors such as Sam Gallagher and Lara Flynn Boyle, and were nominated for an award at Cannes (losing to Ed Burns “The Brothers McMullen.”) But you couldn’t leave your roots behind, could you, Elan? Hair. You had a thing for hair.
So tomorrow is a big deal for you. It comes after years working in the beauty-care industry (you headed up Louis Vuitton’s salons, and started and sold a product line with your mom, Beverly). And it comes with great pride. It’s not just that you’re continuing the work your dad began. You have plans for eight more schools and a product line. It’s that you’re doing it on your own. We’re glad to have you with us, Elan. Now maybe you can convince your pal Jakob to move here, too.