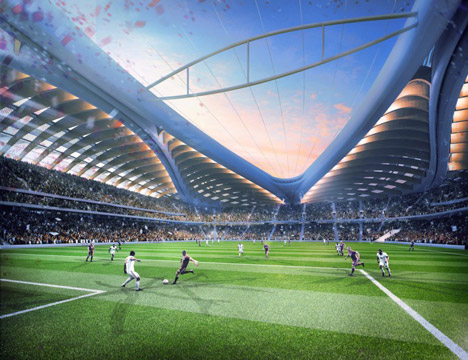 Qatar, with a population of 1.69 million people, will be the first Arab state to host the World Cup.

Qatar promoted their hosting of the tournament as representing the Arab World, and has drawn support from across the member states of the Arab League. They also positioned their bid as an opportunity to bridge the gap between the Arab World and the West.

Qatar gave a feel of what the World Cup would be like by holding a friendly match between Brazil and Argentina. Furthermore, people coming from different nations visited Qatar for this match and strengthened the image Qatar would depict of their interest in the World Cup 2022. Additionally, Qatar hosted the 2011 Asian Cup which had the lowest attendance for the cup in 11 years, since the tournament was held in Lebanon. It was considered a warm-up for 2022.

Al Wakrah Stadium is truly the start of something AMAZING!

The stadium will be located in Al Wakrah, the southern-most city hosting the GAMES.

Designed by AECOM in association with Zaha Hadid Architects, the new 40,000-seat Al Wakrah Stadium is a proposed venue for matches during the 2022 FIFA World Cup Qatar™. Inspired by the dhow boat that carried generations of local fishermen and pearl divers, the stadium weaves together Qatar’s past with its progressive vision for the future. Sustainable materials and practices will be used throughout the stadium and the pitch and spectator stands will be cooled to a perfect temperature for football.