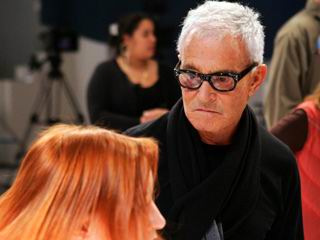 The stylists were given a major dare in the final challenge: They had to copy one of Vidal Sassoon’s most famous bobs — with Sassoon as the guest judge. Yes, Vidal Sassoon, the rock star of haircutting, the man who liberated women from the tyranny of weekly hairdresser’s appointments in the 1960s by creating geometric haircuts that were truly wash and wear. This is the guy who gave Mia Farrow her Rosemary’s Baby pixie — another cut that pushed the envelope and redefined femininity. Can you imagine how nervous the stylists were? They may have acted calm — but they were shaking in their shoes.

The stylists also had to create two other cuts — and all of the looks had to tell a story. I know, it’s complicated. I can’t say it was easy for me to follow, either. And to top that off, they had to be sure the cuts flattered the models and their dresses. Oh, and they had to accomplish it all in three hours.