In the name of the father

Vidal Sassoon’s groundbreaking hairstyles made him a legend. Then he sold out. Now his son, Elan, hopes to build on his vision.

Elan Sassoon was, for years, quite certain he had no interest in the family business. The hair salons, sleek beauty schools, and product lines that made his father, Vidal Sassoon, the best-known hairstylist in the world held little allure. Instead, the younger Sassoon graduated from college in 1993, raised $10 million, and started producing films.

In a few years, his company, Skyline Entertainment, was making critically lauded indie movies with stars such as Blythe Danner, Peter Gallagher, and Lara Flynn Boyle. He was walking the red carpet at Cannes, hanging out with Gwyneth Paltrow and Ethan Hawke.

But the demands of film schedules and festivals, while making him someone to watch in the movie industry, was putting stress on his marriage. He had to make a choice: film or family. He chose family.

The decision drew Sassoon back to the family business, and in no small way. Next year, on Commonwealth Avenue near Boston University, he’ll open the Institute of Hairdesign by Elan Sassoon, slated to be the largest cosmetology school in the world, the first of four across the country. This month, he launches two high-end salons called Mizu, one here with his four business partners  at the posh Mandarin Oriental hotel, another in New York on Park Avenue. He’s partnered on a line of spas called Green Tangerine, and rolls out his own product line next year.

Elan Sassoon is not a hairstylist. He’s a businessman, one with a clear motivation for diving back into the industry he grew up with. He’s determined to expand upon his father’s vision – a vision that changed the beauty industry and the salon world, a vision that Vidal Sasson created, nurtured, and then, in 1983, sold for tens of millions of dollars, losing control of his name in the process.

“My dad didn’t really want to sell in the first place, and it’s something that he always regretted,” Sassoon says. “I want to finish what he started.”

A cut above
Vidal Sassoon built an empire based on his famed geometric cuts and the omnipresent catchphrase “If you don’t look good, we don’t look good.” In the 1960s, Vidal ran in the same celebrated, swinging London circles as the Beatles and the Rolling Stones.

In 1968, Vidal Sassoon was paid $5,000 to cut Mia Farrow’s hair on the set of “Rosemary’s Baby” while dozens of photographers captured the moment. Her pixie cut became as emblematic of the era as miniskirts and bell-bottoms. Sassoon’s haircuts were so influential during this period that the designer Mary Quant declared him “the Chanel of hair.” The first celebrity hairstylist, he had his own TV show in the 1980s, “Your New Day.”

The younger Sassoon says he’s building his brand through business acumen. But it doesn’t hurt that he has the most recognized last name in the salon business and grew up immersed in the culture. His father regularly pulled him out of school to travel to international salons and fashion shows.

“I learned a lot about that world because it was all around me, and it was great,” Elan says over a cup of English breakfast tea at the Bristol Lounge last week. “But it wasn’t where I thought I would end up.”

With a laid-back California lilt to his speech and shoulder-length auburn hair, Elan grew up in a world of bigger-than-life Hollywood parties and celebrity classmates in Beverly Hills. While his sisters loved the glamour of a splashy entrance, the shy Elan and his younger brother would avoid the red carpet and slip into events through the back door.

His mother is actress Beverly Sassoon (nee Adams), best known for her recurring role as Lovey Kravezit in the Matt Helm series of films with Dean Martin. After his parents divorced in 1980, Elan lived with both parents, but he was so shy that even his mother’s celebrity boyfriends couldn’t draw him out of his shell.

“My mom was dating Erik Estrada for a while, and he would pick me up from school on his ‘CHiPs‘ motorcycle,” Sassoon says of the ’70s TV heartthrob. “I was so embarrassed I would tell him to park a few blocks away and I would get on there so the other kids didn’t see me.”

Childhood friend Jason Goldberg, who formed Katalyst Media with Ashton Kutcher and produced “Punk’d” and “Beauty and the Geek,” says even though Elan grew up surrounded by decadence, he’s always been remarkably grounded.

“Even when he was a kid, he wasn’t fazed by any of it,” Goldberg says on the phone from Los Angeles. “Here was a guy who always had a good head on his shoulders. He has the business sense and the level of style and taste to pull off just about anything.”

The one business venture Elan couldn’t pull off was the one closest to his heart. In 2002, he tried to buy back his father’s beauty schools and hair salons. Shortly after his parents’ divorce, his father sold his line of hair products to Richardson-Vicks (later acquired by Procter & Gamble) and the salons and beauty schools to his three top salon managers. The way Elan tells it, his father did not want to sell when Richardson-Vicks made its $125 million offer, but he was outvoted by his shareholders. More than two decades later, Elan Sassoon secured financing to buy back the Vidal Sassoon salons and schools, and worked out an agreement with P&G, which owns the Vidal Sassoon name. But his offer was rejected. The salons were sold to the Regis Corp.

“That took six months of my life to plan and put together,” Elan says, still stung by the loss. “It was a pretty big blow when it was sold to Regis.”

He decided then that if he couldn’t buy back the salons and schools his father started, he’d open his own.

What price beauty?
Elan Sassoon’s state-of-the-art school – with tuition of $19,500 a year – will be one of the priciest beauty academies in the country, and only the second with on-campus housing. The 600 students will also undergo more hours of training than any other Massachusetts cosmetology school. Sassoon says his students will graduate with a far broader knowledge of hair cutting and styling, a concept that other salon owners in Boston applaud.

“They are trained to do the basics,” says Serge Safar, owner of Safar Coiffure on Newbury Street, of the students coming out of beauty schools. “But we end up having to train them another year or two before we can put them on the floor. A more complete education would be a huge benefit.”

Sassoon says he’s commissioning new textbooks that will provide a history of beauty. He’s bringing in experts such as Patrick McGinley, who worked as creative director at the Vidal Sassoon salon on Newbury Street, to craft a curriculum.

But one person who will not be teaching at the academy is Vidal Sassoon himself, now 80. When he sold his name, products, and schools, he signed agreements not to re-enter the beauty world. But he has little doubt that his son’s plans will succeed.

“He’s teaching the old man a thing or two,” the elder Sassoon says on the phone from his home in London. “Hair styling has always been a very exciting world. I wasn’t exactly quiet. I guess he saw what was going on and thought, ‘I can do better than him.’ And I honestly think he will.

“I mean, his whole marvelous idea of adding rooms for people to stay while they’re at school – that was his original idea. I never thought of that. We had schools and never did that. He’s a thinker and a visionary. I’m more than pleased.”

Choosing Boston
The decision to locate the academy in Boston was based, in part, on the city’s strong emphasis on education and its large student population. Elan Sassoon was born in New York, grew up in LA, and spent a year at Berkshire Academy.

But Boston became central to Elan’s world for another reason. In January 2007, his wife of 14 years, Adriana, was diagnosed with Hodgkin’s lymphoma. A former ELITE model in her native Brazil, Adriana endured a frustrating series of biopsies in Miami, where the family was living. In search of the best care, Adriana quickly moved to Boston for treatment. Elan and their two children followed that May. The family lives in Chestnut Hill. Adriana recently celebrated her first cancer-free year. 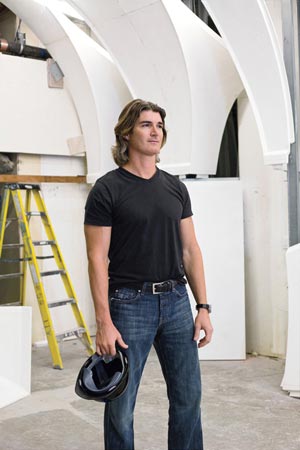 Boston appears to be a good fit for Sassoon, who confesses that he’s far more traditional and strict than his parents when it comes to marriage and family. He was married at the age of 24 and after seeing the result of divorce growing up, his priority is making his marriage work.

“It wasn’t a good situation,” he says of the years after his parents’ divorce. “The boyfriends and the girlfriends and all these people coming into the picture. It’s nice today because I’m still friends with a lot of them. My mom went out with Senator Bill Cohen for three years, he was the secretary of defense. And we’re still friendly.”

Over lemon chicken at P.F. Chang’s a few days later, Sassoon tells stories of a recent New York City media blitz, where magazines such as Men’s Vogue and Details met with him for upcoming feature stories on the low-key and charismatic man and his budding hair empire.

“It’s a little different these days from when I was a kid,” he says. “I think I’ve definitely gotten over my shyness and fear of the red carpet. I kind of enjoy it now.”

Christopher Muther can be reached at muther@globe.com