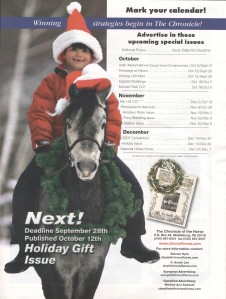 Farewell “Chico Day”…This is our beloved welsh pony Chico, who we have had since he was a s a baby. Scotty and Chico have grown up together building a bond that will never be forgotten.

Scotty requested a day to do whatever he wanted before Chico left for his new home. His first request was to have lunch on him bareback…I couldn’t watch as I was busy in the house charging the video camera battery, but apparently Chico wasn’t crazy about the crinkling lunch bag when Scotty climbed aboard. By the looks of Scotty’s purple and peanut mustache, the lunch had been eaten.

Next, we moved into the ring where Scotty was fooling around without tack. He rode him all over the farm without a saddle or bridle. As each minute passed, he seemed to become braver and more daring. WITHOUT permission, he approached the oxer (3 foot spread) from a trot…It’s hard to see exactly where he’s going when you’re taping. Looking back, I suppose his fetal posture should have indicated that he was up to something. I thought of removing it from the video, because it seemed to interrupt the flow…(somewhat of a hiccup to the beauty of the duo) But taking chances together is precisely what Chico and Scotty were all about. Sometimes things didn’t go exactly to plan. (life can be that way)

But most of the time, the team took my breath away and warmed my heart. Scotty and Chico’s beach gallop, March 3, 2007, was Scotty’s final request.

He swears “no hands” was Chico’s idea.

Regardless, the pair had yet another day together they’ll never forget. Scotty and Chico shared such a special life together, constantly learning about themselves and each other. (nothing short of every mother’s dream)

“Everything I ever needed to know, I learned from my pony (Chico)” 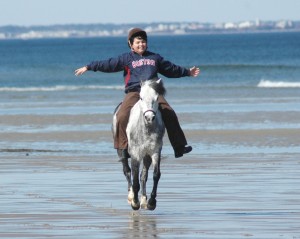