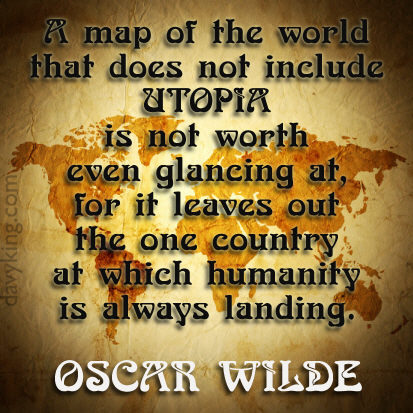 “I’m a dreamer, but I’m not the only one.I hope someday you’ll join us, and the world will be as one.” John Lennon

“TV is sometimes accused of encouraging fantasies. Its real problem, though, is that it encourages-enforces, almost-a brute realism. It is anti-Utopian in the extreme. We’re discouraged from thinking that, except for a few new products, there might be a better way of doing things.” Bill McKibben

“Widely spaced earth-sheltered towns offer sweeping views over the plains. High-speed trains link the communities. Food is grown in the region. Bikeways are everywhere. Nonpolluting hydrogen powers all vehicles. Sunlight and wind generate the hydrogen. Note the earth-covered bridges, the continuous window bands, the wind machines across the farmlands. In this new America, everything is reused, recycled, conserved.”
Malcolm Wells

“The Utopia of a modern dreamer must needs differ in one fundamental aspect from the Nowheres and Utopias men planned before Darwin quickened the thought of the world. Those were all perfect and static States, a balance of happiness won for ever against the forces of unrest and disorder that inhere in things. One beheld a healthy and simple generation enjoying the fruits of the earth in an atmosphere of virtue and happiness, to be followed by other virtuous happy, and entirely similar generations until the Gods grew weary. Change and development were damned back by invincible dams for ever. But the Modern Utopia must be not static but kinetic, must shape not as a permanent state but as a hopeful sage leading to a long ascent of stages.” H.G. Wells

“As long as there is property, and while money is the standard of all things, I cannot think that a nation can be governed either justly or happily; not justly, because the best things will fall to the share of the worst men; nor happily, because all things will be divided among a few (and even these are not in all respects happy), the rest being left to the absolutely miserable.”

“A conspiracy of the rich, who on pretence of managing the public only pursue their private ends, and devise all the ways and arts they can find out; first that they may, without danger, preserve all that they have so ill acquired, and then that they may engage the poor to toil and labor for them at so low rates as possible, and oppress them as they please.”

“The source of happiness is much disputed, among all people, in Utopia.”