Amsterdam is the capital and largest city of the Netherlands.The city is the financial and cultural capital of the Netherlands. Many large Dutch institutions have their headquarters there, and 7 of the world’s top 500 companies, including Philips and ING, are based in the city.

Amsterdam has over 50 museums, which draw crowds of tourists each year.There are numerous art galleries displaying wonderful collections of art.

Industrial Designer, Willem Hendrik Gispen (1890-1981), specialized in wrought iron and ornamental metalwork. His vision was to carry his designs to the Office Furniture world and so began the inception of Gispen in 1916.

The central area of the Eastern Docklands, has some of the most striking new apartment buildings and also most of the historical buildings in the area.Several of these historical maritime buildings have been renovated; others are still being restored. Brazilie is the shopping center is situated in an old warehouse. In the earlier part of the twentieth century this warehouse was used for cocoa storage  from Central or South America. www.easterndocklands.com 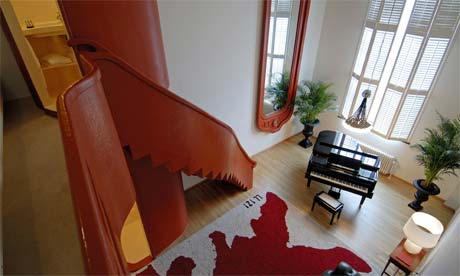 The first ‘one to five star’ hotel of the world is situated in a revamped 1920s building and is a showcase of Dutch design.