The idea for the film started off as a personal tribute to him as he was approaching his 80th birthday, and then it grew into a major initiative to capture this man’s life both in a film and a book. My intention was to leave a lasting memory of him that would inspire young people and re-inspire the older generation of hairdressers, as well as the millions of people in the world to whom the name Vidal Sassoon is either familiar or personal or evocative. Due to the fact that hairdressing’s impact on society has not been very well documented or recorded, much less respected because of the lack of any serious written material, I am hoping that this is something that every hairdresser in the world will want to share with everyone they know.  by  Michael Gordon

VIDAL SASSOON THE MOVIE: How One Man Changed the World with a Pair of Scissors, Director Craig Teper, USA, 2010, 93 Minutes, Documentary, Video.

Born in 1928, Vidal Sassoon spent six years of his impoverished London childhood in a Jewish orphanage. Beginning as a shampoo boy at age 14, Vidal eventually became the most in?uential hairdresser in the world. This documentary, produced by Bumble and Bumble founder Michael Gordon, is a trip to Carnaby Street, Mary Quant’s mod look, the invention of the mini-skirt, geometric haircuts, and more. Why not take the afternoon off and come as your 60s self?

The full link to the Jewish Film Festival : 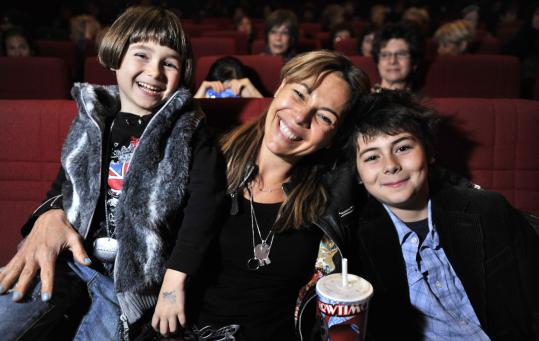 Adriana Sassoon with her children, Isabela and Ariel, at Coolidge Corner Theatre.

(Josh Reynolds for The Boston Globe)

*Many thanks to Sara Rubin and to Jayme Saks, for including the movie at the The Jewish Film Festival Boston.

Vidal Sassoon is more than just a hairdresser,he’s a rock star, an artist, a craftsman who “changed the world with a pair of scissors.” With the geometric, Bauhaus inspired cuts.

A fast-paced feature documentary spanning 80 years of revolution in history and culture,  Vidal Sassoon: the Movie is a true rags to riches tale, tracing Sassoon’s path from a London orphanage to international success and celebrity.Bauhaus-inspired styles and “wash and wear” philosophy quite literally changing the way women looked. The fashion, style and social revolutions of the 1960’s come alive as the design of the book and the film unfold.

Sassoon was born to Jewish parents in London. His father was from Salonica (Thessaloniki in Greece), and his mother, whose family was originally from Kiev, was born in London. Although too young to serve in the Second World War, Sassoon became a member of the 43 Group, a Jewish veterans’ militia organisation that broke up Fascist meetings in East London after the end of the war. In 1948 he joined the Israeli Defence Forces to fight in the 1948 Arab-Israeli War.

Sassoon’s works include the geometric, the wash-and-wear perm, and the “Nancy Kwan.” They were all modern and low-maintenance. The hairstyles created by Sassoon relied on dark, straight, and shiny hair cut into geometric yet organic shapes. In 1963, Sassoon created a short, angular hairstyle cut on a horizontal plane that was the recreation of the classic “bob cut.” His geometric haircuts seemed to be severely cut, but were entirely lacquer–free, relying on the natural shine of the hair for effect. Sassoon is a father of modernist style and has also been a key force in the commercial direction of hair styling, turning its craft in to a multi-million dollar industry.